Marianne and the Crown of Fire 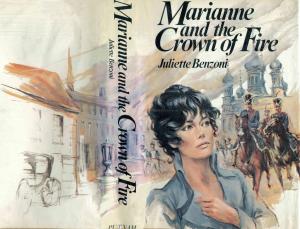 Guarding with her life the secret she carries to save Napoleon, Marianne braves the barren steppes and hostile natives of Russia to deliver her message to the Emperor, who was once her lover. She is accompanied by her lover from New Orleans, Jason Beaufort, who has abandoned the charred hulk of his ship in the harbor of Constantinople to travel with her. Just inside the Russian border, they save the life of a beautiful young gypsy named Shankhala and take her with them. Shankhala offers no gratitude but shows a burning desire for Jason. Failing to allure him, she turns her witchery against Marianne.
The Moscow they reach has already fallen under siege, and its citizens' fear has turned perversely into self-immolation. When Jason is thrown in prison after a duel with the Cossack who several years earlier had ravished and branded Marianne, she is left alone amid the swarming mass of panicked humanity—or, rather, almost alone, as the gypsy witch embraces Marianne, then stabs her and leaves her to be trampled and swept away by the maddened throng.
The vicious Russian writer finds Moscow drowned in a sea of fire and Marianne nursed to health by angels in the forms of other French-women trapped in this hostile country. Risking her life to see him, Marianne finds Napoleon suffering from strain and despair and eager to regain Marianne's devotion. Once she has delivered her message, Marianne's life again becomes a series of questions: Will she ever return to her homeland? Will she ever find the child who was separated from her? And her husband, where is he? Does he even live? Marianne: Crown of Fire is an adventure in the truest sense—it is a fascinating torrent of desire, courage, terror, and one woman's struggle to survive. This sixth volume of Marianne's adventures will delight the reader who thrills to excitement and romance. Each of its predecessors has been enjoyed by hundreds of thousands of readers around the world.

Комментарии к книге "Marianne and the Crown of Fire"