My Prizes: An Accounting 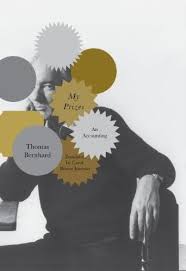 A gathering of brilliant and viciously funny recollections from one of the twentieth century’s most famous literary enfants terribles.
Written in 1980 but published here for the first time, these texts tell the story of the various farces that developed around the literary prizes Thomas Bernhard received in his lifetime. Whether it was the Bremen Literature Prize, the Grillparzer Prize, or the Austrian State Prize, his participation in the acceptance ceremony — always less than gracious, it must be said — resulted in scandal (only at the awarding of the prize from Austria’s Federal Chamber of Commerce did Bernhard feel at home: he received that one, he said, in recognition of the great example he set for shopkeeping apprentices). And the remuneration connected with the prizes presented him with opportunities for adventure — of the new-house and luxury-car variety.
Here is a portrait of the writer as a prizewinner: laconic, sardonic, and shaking his head with biting amusement at the world and at himself. A revelatory work of dazzling comedy, the pinnacle of Bernhardian art.