The Cat Who Could Read Backwards 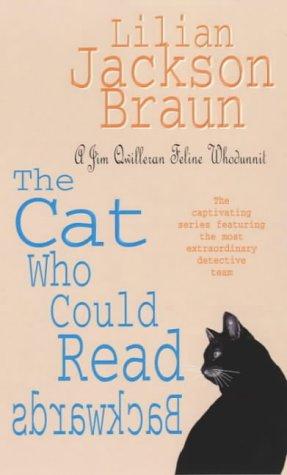 Jim Qwilleran is a prizewinning reporter who's been on the skids but is now coming back with a job as feature writer (mostly on the art scene) for the Daily Fluxion. George Bonifield Mountclemens, the paper's credentialed art critic, writes almost invariably scathing, hurtful reviews of local shows; delivers his pieces by messenger; lives with his all- knowing cat Koko in a lushly furnished house in a moldering neighborhood, and has a raft of enemies all over town.
He offers the newcomer a tiny apartment in his building at a nominal rent, and Qwilleran grabs it, surmising the deal will involve lots of cat-sitting.
Meanwhile, a gallery whose artists get happier treatment from Mountclemens is owned by Earl Lambreth. The acerbic critic has praised paintings
there by a reclusive Italian named Scrano; the junk assemblages of Nino, who calls himself a "Thingist", as well as works by Lambreth's attractive wife Zoe. It's Zoe who, one night past closing, finds her husband stabbed to death in the vandalized gallery. Days later, Qwilleran, guided by an insistent Koko, finds Mountclemens's knifed corpse on the patio behind his house.

Другие книги серии "The Cat Who..."

The Cat Who Had 14 Tales

The Cat Who Had 60 Whiskers

Комментарии к книге "The Cat Who Could Read Backwards"