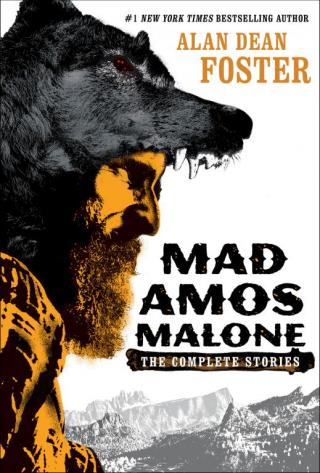 Eighteen twisted tales of the wildest West that’s ever been imagined, from the #1 New York Times bestselling author of the Pip & Flinx series
Strange things lurk up in the mountains and out in the plains and deserts of the West, but few are as unique as the giant mountain man named Amos Malone, who some call “Mad Amos”—though not to his face. Atop his unnatural steed, Worthless, Mad Amos is prepared to step into any fray and set things right, albeit in his own unusual way.
Now all of his uncanny exploits—including the brand-new story “Stuck”—are collected together for the first time. For this special edition, Alan Dean Foster has also penned original introductions to the series and to each individual adventure.
Featuring eight never-before-collected stories, including…
GHOST WIND: Nature has a way of making even the strongest folks meek. And with a ghost wind coming over the valley, even Mad Amos Malone is feeling the chill.
HOLY JINGLE: Of all the dangers of the Wild West, love might be the most perilous. Because when it goes awry, there’s no telling what might be at stake.
A MOUNTAIN MAN AND A CAT WALK INTO A BAR: Mad Amos isn’t quickly moved to action. Still, when it comes to a dog fight, he’s not afraid to bare his teeth.
STUCK: The untouched grove of Sequoias is one of the most beautiful, soul-rejuvenating, downright sacred places Amos has ever visited. Until he hears a cry for help….
Praise for Mad Amos Malone

“The consistent rhythms of [Alan Dean] Foster’s language, his shaggy-dog puns, and the distinctive clarity of Malone’s rough yet occasionally educated voice draw readers quickly into each story’s mood while maintaining strong connections between the pieces.”
—Publishers Weekly

Spellsinger 02 - The Hour of the Gate

Feud On The Mesa

Osceola the Seminole / The Red Fawn of the Flower Land