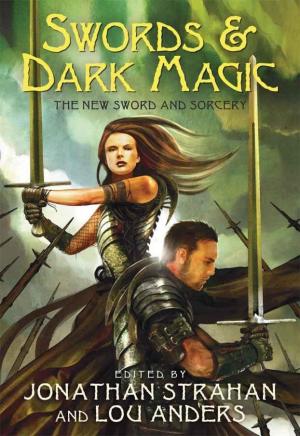 A truly breathtaking new anthology edited by Jonathan Strahan and Lou Anders, Swords & Dark Magic offers stunning new tales of sword and sorcery action, romance, and dark adventure written by some of the most respected, bestselling fantasy writers working today—from Joe Abercrombie to Gene Wolfe. An all-new Elric novella from the legendary Michael Moorcock and a new visit to Majipoor courtesy of the inimitable Robert Silverberg are just two of the treasures offered in Swords & Dark Magic—a fantasy lover’s dream.
Seventeen original tales of sword and sorcery penned by masters old and new
Elric…the Black Company…Majipoor. For years, these have been some of the names that have captured the hearts of generations of readers and embodied the sword and sorcery genre. And now some of the most beloved and bestselling fantasy writers working today deliver stunning all-new sword and sorcery stories in an anthology of small stakes but high action, grim humor mixed with gritty violence, fierce monsters and fabulous treasures, and, of course, swordplay. Don’t miss the adventure of the decade!

Dawn of the Planet of the Apes: Firestorm - The Official Movie Prequel

30 Days of Night: Fear of the Dark