Blood for the Blood God 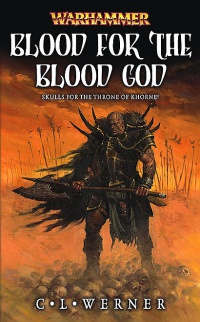 This is a dark age, a bloody age, an age of daemons and of sorcery. It is an age of battle and death and of the world’s ending. Amidst all of the fire, flame and fury it is a time, too, of mighty heroes, of bold deeds and great courage.
At the heart of the Old World sprawls the Empire, the largest and most powerful of the human realms. Known for its engineers, sorcerers, traders and soldiers, it is a land of great mountains, mighty rivers, dark forests and vast cities. And from his throne in Altdorf reigns the Emperor Karl-Franz, sacred descendant of the founder of these lands, Sigmar, and wielder of his magical warhammer.
But these are far from civilised times. Across the length and breadth of the Old World, from the knightly palaces of Bretonnia to ice-bound Kislev in the far north, come rumblings of war. In the towering Worlds Edge Mountains, the orc tribes are gathering for another assault. Bandits and renegades harry the wild southern lands of the Border Princes. There are rumours of rat-things, the skaven, emerging from the sewers and swamps across the land. And from the northern wildernesses there is the ever-present threat of Chaos, of daemons and beastmen corrupted by the foul powers of the Dark Cods. As the time of battle draws ever nearer, the Empire needs heroes like never before.