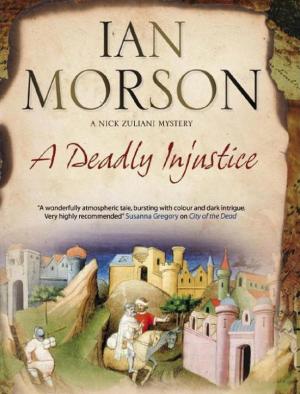 Nick Zuliani hails from Venice, though his mother is English. Estranged from his father, he has become a bit of a wheeler-dealer and conman. An unfortunate incident (told in one of my short stories) results in him fleeing the Serene Republic. But, as bodyguard to Friar Alberoni, he ends up at the heart of the Mongol Empire in the 13th century where he has to solve some unusual murder cases.

BOOK TWO: A DEADLY INJUSTICE
A Nick Zuliani Mystery set in Kubilai Khan's court – Cathay, 1268. Nick Zuliani and Lin Chu-Tsai are sent to a provincial town to investigate the case of a young Chinese girl condemned to death for murder. They encounter an acting troupe, and a soon-to-be-famous playwright who is keen to see Mongol justice being taken to task. Zuliani and Lin are faced with a dilemma. Do they confirm the girl's guilt in the face of contrary evidence in order to save themselves? Or stand up to the local Mongol governor, and risk the wrath of the Great Khan?

Falconer and the Death of Kings

Death on an Autumn River