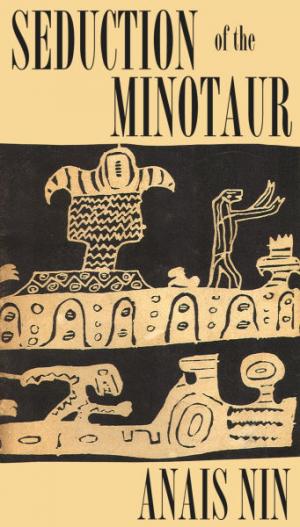 Seduction of the Minotaur is an example of Anaïs Nin’s most mature and cohesive fiction. The central character, Lillian, arrives in an exotically primitive Mexico from New York, in part to forget her crumbling marriage and to find flow in her life after years of stasis. She befriends Dr. Hernandez, who, like Lillian, is also trying to forget, to escape, which he does with violence, shocking Lillian into facing her inner demon, the “Minotaur.”
Critic Oliver Evans says of Seduction of the Minotaur: “Its symbolism is the most complicated of any of Miss Nin’s longer works… and at the same time it makes more concessions…to the tradition of the realistic novel: the result is a work of unusual richness.”
Consider this passage: “It was the time of the year when everyone’s attention was focused on the moon. ‘The first terrestrial body to be explored will undoubtedly be the moon.’ Yet how little we know about human beings, thought Lillian. All the telescopes are focused on the distant. No one is willing to turn his vision inward… Such obsession with reaching the moon, because they have failed to reach each other, each a solitary planet!”
Seduction of the Minotaur reveals Nin’s struggle for self-awareness through her character Lillian. In a setting that is sumptuously described, with fully developed characters, the plot involves the dichotomy between civilization and the primitive, the dark and bright sides of human nature, with a conclusion that is classic Nin: enlightenment.
(Seduction of the Minotaur was originally published as Solar Barque in 1958)