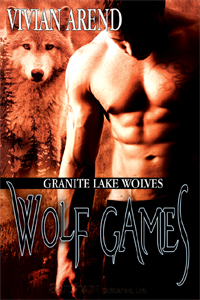 True love’s path never did run smooth.
Granite Lake Wolves, Book 3
After seven years of total denial, Maggie Raynor’s body—and her inner wolf—are in full revolt. Weak and shaky, she literally falls into the very large and capable arms of the Granite Lake Beta, Erik Costanov. The last thing she wants is a mate, particularly when just looking at another wolf scares her to death. And one as big and sexy as Erik? Really bad idea, no matter what her libido says.
Erik expected to meet Maggie in Whitehorse to escort her to the home of her sister, his pack’s Omega. Sheer chance puts him in the right place at the right time to catch her, but the realization that hits him with the force of a full body shot is no accident. She’s his mate. An even bigger shock? She wants no part of him—not until she resolves her issues.
She’ll have to work fast, because they’re both selected to represent the pack during the premier sporting event for wolves in the north. Not only will she have to work as a team with Erik, she’ll have to face down her fear of wolves. Let the Games begin.
Warning: Contains uber-sexy werewolves of Russian descent, reluctant mates and exotic travels through the Yukon wilderness. Includes sarcasm and hot nookie under the Midnight Sun.

The House on the Strand