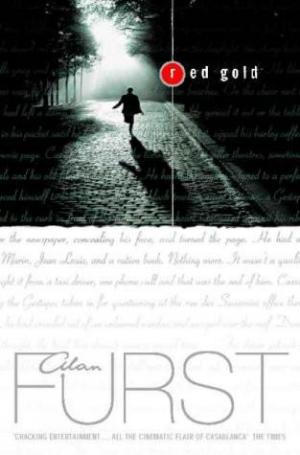 If you enjoy mysteries set against the rich background of World War II Europe (Philip Kerr's Berlin Noir trilogy and the fine French series by J. Robert Janes are prime examples), you should also know about Alan Furst. He began by writing such excellent, original books as Dark Star and Night Soldiers, all set in Eastern Europe. The locale then moved to Paris for The World at Night, where we first met the enigmatic film producer and reluctant Resistance hero Jean Casson.

Casson returns in fascinating form in Red Gold, washing up broke and depressed in his home city, now totally ground down by its German occupiers. Recruited by a sympathetic cop, Casson joins a group of officers working undercover inside the Vichy government to help de Gaulle. Casson's job is to convince justifiably skeptical French communists to cooperate; to do so he must organize a complicated, extremely dangerous transfer of weapons. There's nothing glamorous about the work or its result, but Furst is such a persuasive writer that we come to realize what a success it is for Casson just to stay alive. This innovative and gripping novel eloquently transports us back to a different era and a different world. --Dick Adler

A Hero of France