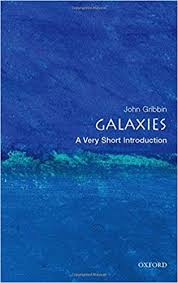 In this fascinating Very Short Introduction, popular science writer John Gribben tells the story of our growing understanding of galaxies, from the days before Galileo to our present-day observations of our many hundreds of millions of galactic neighbors. Not only are galaxies fascinating astronomical structures in themselves, but their study has revealed much of what we know today about the cosmos, providing a window on the Big Bang and the origins of the Universe. Gribben looks at our own "Milky Way" Galaxy in detail, from the different kinds of stars that are born within it, to the origins of its magnificent spiral structure. Perhaps most interesting, Gribben describes the many exciting discoveries have been made about our own galaxy and about those beyond: how a supermassive black hole lurks at the center of every galaxy, how enormous forces are released when galaxies collide, how distant galaxies provide a window on the early Universe, and how the formation of young galaxies shed needed light on the mysteries of Cold Dark Matter.
About the Series: Combining authority with wit, accessibility, and style, Very Short Introductions offer an introduction to some of life's most interesting topics. Written by experts for the newcomer, they demonstrate the finest contemporary thinking about the central problems and issues in hundreds of key topics, from philosophy to Freud, quantum theory to Islam.

The Universe: A Biography

The Scientists: A History of Science Told Through the Lives of Its Greatest Inventors

Stephen Hawking: A Life in Science

Computing with Quantum Cats: From Colossus to Qubits