Resonance in physics, chemistry and biology 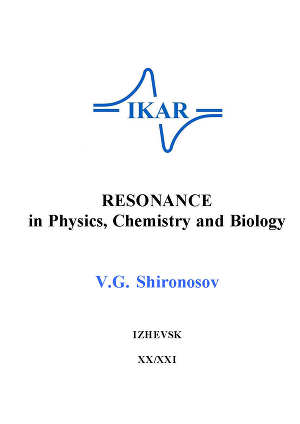 -The resonant problems in different areas of physics, chemistry and biology from the unified point of view - extremeness of resonant statuses of motion in the nature are reviewed. In particular, the problems of dynamics of motion and holding of atomic, macroscopic particle, micro-organisms in inhomogeneous fields, outside and inside resonance conditions are analyzed; problems of dynamic stability of unstable states, bifurcation, chaos, discretization, evolution of non-linear dynamic systems which are not inclusive in an obvious view a small parameter. A fundamentals of the resonant theory of dynamic systems are set out. The unsolved problems are marked and the paths of their solution are planed, in particular: ball lightning, activated water, resonant effect of superweak fields at biological systems, including correlation between periods of solar activity and processes happening at this time on the Earth.

----This book has arisen as outcome of the numerous lectures and seminars, in which one I attempted in the understandable form to set out an achievements of the different explorers, in the most different spheres of activity at unified object of our research her Majesty - Nature. The contents of the book was finally made after I had in a winter semester 1999/2000 to read a course of the lectures for the students-biophysicist of physical faculty of the Udmurt state university. . The noticeable place in the book takes a phenomenon of the resonance which has permitted to realize unified connection of phenomena, diversiform ambient and diving through us. Moreover, I and my employees in a lot of cases have could to influence “development of events” in this area.

Manual of Psychomagic: The Practice of Shamanic Psychotherapy