Cave in the snow. A western woman’s quest for enlightenment 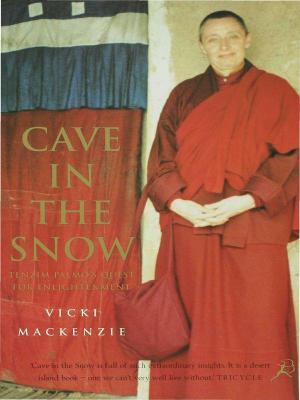 The biography of the Englishwoman who has become a world-renowned spiritual leader and a champion of the right of women to achieve spiritual enlightenment. Following Tenzin Palmo's life from England to India, including her seclusion in a remote cave for 12 years, leading to her decision to found a convent to revive the Togdenma lineage.
Amazon.com Review
It sounds like a legend out of medieval Tibet: the ascetic who leaves home to join the Buddhist order, then spends 12 years in a cave, 15 hours a day in a meditation box. This is no legend, but you could call Tenzin Palmo legendary in her single-minded pursuit of higher realizations. From the East End of London to halfway up the Himalayas, she is now back in society, attempting to pull medieval Tibetan Buddhism into the modern era--women's rights and all. As biographer Vickie Mackenzie says by way of background, a group of elite women practitioners called "Togdemnas" still existed just decades ago. Tenzin Palmo, having studied with her male counterparts, is now canvassing the planet, welcoming women into full participation in Tibetan Buddhism and building support for an academy of Togdemnas that she plans to establish in the Himalayas. Mackenzie helps raise awareness for women's roles in Tibetan Buddhism by going into some detail about obstacles still faced by women as well as heroines who have overcome those obstacles, such as Yeshe Tsogyel (Sky Dancer) and Machig Lapdron, a mother who started her own lineage. If Mackenzie has it her way, it won't be long before Tenzin Palmo joins that list of heroines. –Brian Bruya –This text refers to an out of print or unavailable edition of this title.

Комментарии к книге "Cave in the snow. A western woman’s quest for enlightenment"