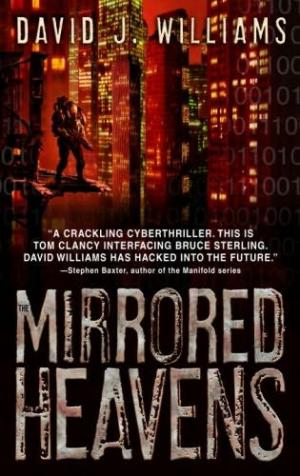 In this thrilling debut, David J. Williams delivers a hard-hitting blend of military SF and dystopian cyberpunk, set in a futuristic landscape where hostilities rage from the Eastern and Western hemispheres to the outer ranges of space.
In the 22nd century, the first wonder of a brave new world is the Phoenix Space Elevator, designed to give mankind greater access to the frontier beyond Earth. Built by the U.S./Pan-Asian Coalition, the Elevator is also a grand symbol of superpower alliance following a second cold war. And it's just been destroyed.
The South American insurgent group Autumn Rain claims responsibility for the attack, but with suspicions rampant, armies and espionage teams are mobilized across the globe and beyond. Enter Claire Haskell and Jason Marlowe, U.S. counterintelligence agents, and former lovers—though their memories may only be constructs implanted by their spymaster. Forced to set aside the enigma of their past, their agenda is to trust no one. For in a time of shifting loyalties, the enemy could be anyone—from a shadowy assassin working a questionable mission on the dark side of the moon, to a Euro data thief working under deep cover and wooed into a dangerous pact.
As the crisis mounts, and the search for Autumn Rain spans both Earth and Moon, the lives of all those involved will converge in one explosive finale—and a startling aftermath that will rewrite everything they've ever known—about their mission, their world, and themselves

The Machinery of Light

The Machinery of Light