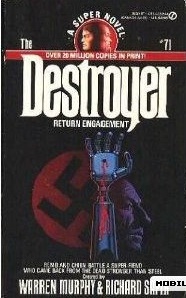 What was Nazism doing in America in the l980s? A lot.
Jack-booted stormtroopers. Mobs howling for racial purity. And on the podium a man ranting and raving and holding his followers spellbound as swastika flags waved above them.
Out of what hellish depth of the past had the hideously scarred man who called himself Herr Fuhrer Blutsturz emerged..with his artificial limbs that gave him superhuman strength..with his voluptuous blonde assistant Ilsa who seduced what he couldn't destroy..and with his burning desire to kill Dr. Harold W. Smith, head of the top-secret U.S. Agency CURE, even if he had to rip America into bloody shreds to do it?
Remo and Chiun had to find the answer to this monstrous mystery and the antidote to this irresistible evil. But first they had to find a way to stop battling each other and stay alive long enough to do it...

The Language Of Cannibals

Emissaries from the Dead