The Great Fiction. Property, Economy, Society, and the Politics of Decline 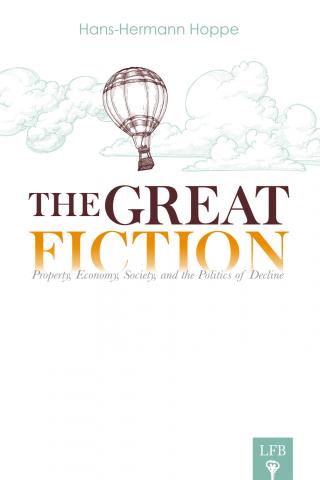 If you are unfamiliar with the working of Hans-Hermann Hoppe, prepare for The Great Fiction to cause a fundamental shift in the way you view the world. No living writer today is more effective at stripping away the illusions almost everyone has about economics and public life. More fundamentally, Professor Hoppe causes the scales to fall from one’s eyes on the most critical issue facing humanity today: the choice between liberty and statism.

The title comes from a quotation by Frederic Bastiat, the 19th century economist and pamphleteer: “The state is the great fiction by which everyone seeks to live at the expense of everyone else.” He does not say that this is one feature of the state, one possible aspect of public policy gone wrong, or one sign of a state gone bad in a shift from its nightwatchman role to become confiscatory. Bastiat is characterizing the core nature of the state itself.

The whole of Hoppes writings on politics can be seen as an elucidation on this point. He sees the state as a gang of thieves that uses propaganda as a means of disguising its true nature. In fleshing this out, Hoppe has made tremendous contributions to the literature, showing how the state originates and how the intellectual class helps perpetuate this cover up, whether in the name of science, or religion, or the provision of some service like health, security, education, or whatever. The excuses are forever changing; the functioning and goal of the state are always the same.

It is true, then, that Hoppe stands with a long line of anarchist thinkers who see the state as playing a purely destructive role in society. But unlike the main line of thinkers in this tradition, Hoppe’s thinking is not encumbered by utopian illusions about society without the state. He follows Ludwig von Mises and Murray N. Rothbard in placing private property as a central element in social organization. In justifying this point of view, Hoppe goes far beyond traditional Lockean phrases. He sees private property as an inescapable institution in a world of scarcity, and draws on the work of contemporary European philosophy to make his claims more robust than any of his intellectual predecessors did.

The reader will be surprised at the approach Hoppe takes because it is far more systematic and logical than people expect of writers on these topics. I suspect that this is because he came to views after a long intellectual struggle, having moved systematically from being a conventional left-socialist to become the founder of his own anarcho-capitalist school of thought. The dramatic change happened to him in graduate school, as he reveals in the biographical sections of this book. He takes nothing for granted in the course of his argumentation. He leads the reader carefully through each step in his chain of reasoning. This approach requires extraordinary discipline and a level of brilliance that is out of the reach of most writers and thinkers.

This particular work goes beyond politics, however, to show the full range of Hoppe’s thought on issues of economics, history, scientific methodology, and the history of thought. In each field, he brings that same level of rigor, that drive for uncompromising adherence to logic, the fearlessness in the fact of radical conclusions. In light of all of this, it seems too limiting to describe Hoppe as a mere member of the Austrian or libertarian tradition, for he really has forged new paths—in more ways than he makes overt in his writings. We are really dealing here with a universal genius, which is precisely why Hoppe’s name comes up so often in any discussion of today’s great living intellectuals.