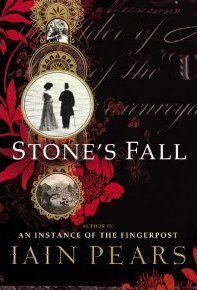 A tour de force in the tradition of Iain Pears' international bestseller, An Instance of the Fingerpost, Stone's Fall weaves a story of love and high finance into the fabric of a page-turning thriller. A novel to stand alongside Atonement and The Remains of the Day.

A panoramic novel with a riveting mystery at its heart, Stone's Fall is a quest, a love story, and a tale of murder — richly satisfying and completely engaging on many levels. It centres on the career of a very wealthy financier and the mysterious circumstances of his death, cast against the backdrop of WWI and Europe's first great age of espionage, the evolution of high-stakes international finance and the beginning of the twentieth century's arms race. Stone's Fall is a major return to the thriller form that first launched Iain Pears onto bestseller lists around the world and that earned him acclaim as a mesmerizing storyteller.

An Instance of the Fingerpost

Jane and the Genius of the Place