19 with a Bullet: A South African Paratrooper in Angola 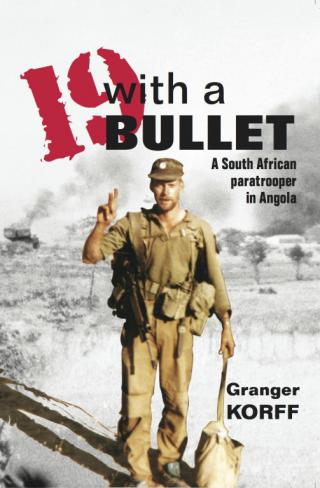 A fast-moving, action-packed account of Granger Korff’s two years’ service during 1980/81 with 1 Parachute Battalion at the height of the South African ‘bush war’ in South West Africa (Namibia) and Angola. Apart from the ‘standard’ counter-insurgency activities of Fireforce operations, ambushing and patrols, to contact and destroy SWAPO guerrillas, he was involved in several massive South African Defence Force (SADF) conventional cross-border operations, such as Protea, Daisy and Carnation, into Angola to take on FAPLA (Angolan MPLA troops) and their Cuban and Soviet allies.
Having grown up as an East Rand rebel street-fighter, Korff’s military ‘career’ is marred with controversy. He is always in trouble—going AWOL on the eve of battle in order to get to the front; facing a court martial for beating up, and reducing to tears, a sergeant-major in front of the troops; fist-fighting with Drug Squad agents; arrested at gunpoint after the gruelling seven-week, 700km Recce selection endurance march—are but some of the colorful anecdotes that lace this account of service in the SADF.
Korff’s writing is frontline punchy, brutal, self-deprecating and at times humorous but always honest, providing the reader with what it was like to be one of apartheid’s grunt soldiers.

Комментарии к книге "19 with a Bullet: A South African Paratrooper in Angola"