My Life Is a Weapon: A Modern History of Suicide Bombing 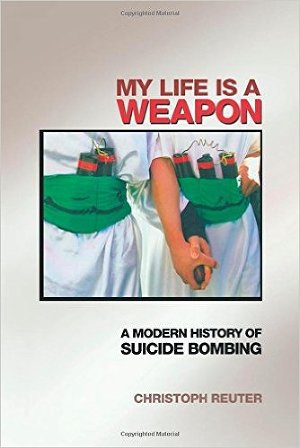 A book on suicide bombers has the potential to be gripping and revelatory. With such a title as the one above, it's not unreasonable to expect a first-person account of the motivations of a would-be bomber or plenty of material taken from primary-source interviews. Unfortunately, this is not the book it presents itself to be. Instead, Reuter, a reporter for the German magazine Stern, provides a serviceable introduction to the modern history of suicide bombing by Hezbollah, Hamas, the Iranian children's battalions in the Iran-Iraq war and Japanese kamikaze pilots, among others. While the research is good, Reuter tells us nothing that has not already been written about in other books or magazines. He did conduct a handful of interviews with the mothers of suicide bombers. However, these were arranged by the sponsoring terrorist organization, so it's unclear whether the mothers' expressions of pride and happiness over their sons' deaths are their true sentiment or if they are simply reciting group propaganda. Nor does Reuter offer much analysis. Other interviews are with intelligence and law enforcement agents, whose input helps to better understand the logistics of suicide operations but does not shed much light on the psyche of the would-be bombers. Other books by scholars who conducted interviews directly with would-be bombers and terrorist combatants have set a higher standard; examples include Jessica Stern's Terror in the Name of God and Joyce Davis's Martyrs. Though not bad, Reuter's account falls short of the current caliber of such material on the subject.

Комментарии к книге "My Life Is a Weapon: A Modern History of Suicide Bombing"