Bloody Triangle: The Defeat of Soviet Armor in the Ukraine, June 1941 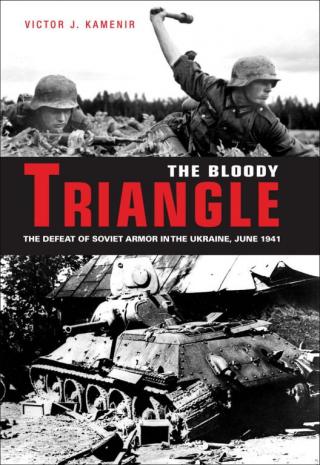 It was a tank battle exceeded in size and significance only by the famous defeat of Germany’s Panzer force near Kursk in 1943. And yet, little is known about this weeklong clash of more than two thousand Soviet and German tanks in a stretch of northwestern Ukraine that came to be known as the “bloody triangle.”
This book offers the first in-depth account of this critical battle, which began on 24 June 1941, just two days into Operation Barbarossa, Hitler’s invasion of the Soviet Union.
Author Victor Kamenir describes the forces arrayed against each other across that eighteen-hundred-square-mile-triangle in northwestern Ukraine. Providing detailed orders of battle for both Wehrmacht and Red Army Forces and contrasting the strengths and weaknesses of the Soviet and German tanks, he shows how the Germans slowly and decisively overwhelmed the Russians, apparently opening the way to Moscow and the ultimate defeat of the Soviet Union.
And yet, as Kamenir’s account makes clear, even at this early stage of the Russo-German war the Soviets were able to slow down and even halt the Nazi juggernaut. Finally, the handful of days gained by the Red Army did prove to have been decisive when the Wehrmacht attack stalled at the gates of Moscow in the dead of winter, foreshadowing the end for the Germans.
Review
Midwest Book Review
“During the summer of 1941, a marshy area of the Ukraine witnessed a battle between over 2,000 tanks in a pivotal, early armor clash of World War II. Victor Kamenir details the little known battle between Soviet and German forces that was a harbinger of things to come on the Eastern Front… Told largely in the words of the men who were there, this informative history shed new light on how the Soviet tank units melted away under the merciless onslaught of their determined and well equipped adversary. From the early planning stages, when German intelligence realized the Soviet command structure would more than likely be slow to respond to a rapidly changing tactical situation, to the final unsuccessful counteroffensive by the Russians, this book offers a complete picture of the entire event. Kamenir’s insightful analysis also compares and contrasts the strengths and weaknesses of the equipment utilized by both sides in the struggle.”