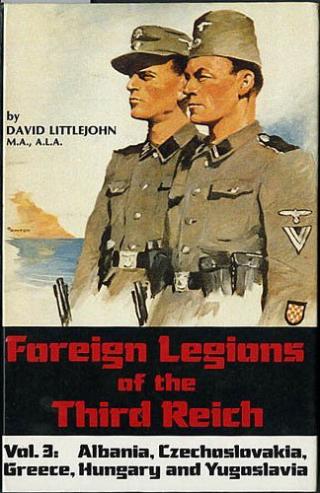 "Foreign Legions of the Third Reich" Volumes 1-4 by David Littlejohn was the benchmark on the subject of foreigners fighting for the Nazis in WWII during the 1980s. However, today some of the material is somewhat dated, but has stood the test of time and still remains one of the go-to resources for this subject and today still provides a very good introduction to the subject. This series of books predominantly focuses on the organizational structure of these "legions" going into extreme coverage of the various insignia, decorations and awards. This series of book is superbly illustrated with line drawings and period photography. This series of books is a must own for anyone starting to research these units. However, since the publication of the series many books have been released on the various foreign legions of Nazi Germany that delve deeper into the subject than any one of these books in the series.

Under the Red Star: Luftwaffe Aircraft in the Soviet Air Force

Armor and Blood: The Battle of Kursk: The Turning Point of World War II