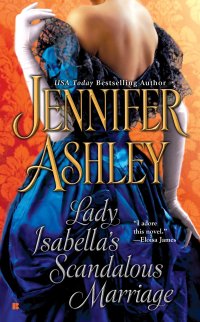 Only one man could match a lady like this—scandal for scandal.
Six years ago, eighteen-year-old Lady Isabella Scranton scandalized all of London by eloping the night of her come-out ball with the notorious rake, Lord Mac Mackenzie. After three turbulent years of marriage, she scandalized London once again—this time by leaving him.
Now Mac has resurfaced, every bit as charismatic, and with one goal: to seduce Isabella back into his life and his bed even if it means acting like a real gentleman. But when Isabella rises to the challenge of posing nude for Mac's erotic paintings, her pent-up hunger for the decadent rake is exposed as well, and she finds herself unable to resist the smooth strokes of an artist at work.
But someone's been watching them—dangerously close. This ingenious forger with designs on Mac's paintings also sets his sights on Isabella herself. Deciding to become Isabella's protector, Mac vows to never leave her side, whether his independent and proud lady likes it or not.

The Seduction of Elliot McBride