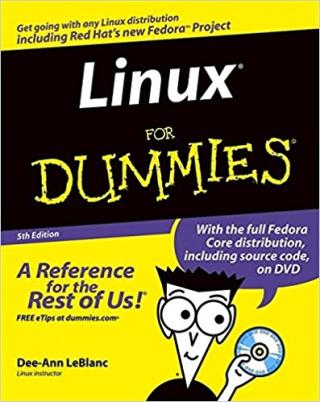 Geared to casual users who want to install Linux on a personal machine--in other words, hobbyists--Linux for Dummies walks the reader through installing, configuring, tuning, and using each version of Linux. While the book includes a useful comparison of various Linux distributions, the companion CD-ROM holds Red Hat Linux 5.0 and the book uses that distribution in its examples.

This clearly written text begins by helping you prepare your system for Linux, going so far as to recommend you get it a special hard disk. The authors then show you how to install the system--including the mechanics of selecting file systems and setting up hardware--and then help you log on for the first time.

Next, Linux for Dummies explains elementary commands, including those used to traverse directories and to copy and move files. The book then explores storage issues, detailing how to install and configure a new hard drive in excellent detail. Shells, such as bash and X Windows, get cursory coverage (but adequate, considering the purpose of the book). Linux for Dummies also includes information on certain applications (including vi and emacs) and a guide to tuning and customization that sadly lacks much about shell programming. Internet services, including WAIS, FTP, and Gopher, get their due, but the Apache Web server gets slighted. Overall, this is the best user-lever Linux guide available. --This text refers to an out of print or unavailable edition of this title.

• This friendly guide gives Linux newcomers the lowdown on how to install and use Linux on the desktop-and join the worldwide community of twenty million Linux users
• Shows how to get up and running with the latest versions of Red Hat Linux as well as two other popular Linux distributions: Mandrake and SuSE
• Covers prepping a computer for Linux, booting and stopping Linux, connecting to the Internet, surfing the Web, using e-mail, working with cool Internet tools, and manipulating files and directories
• Now revised with enhanced coverage of the OpenOffice.org Desktop Productivity Suite.
• Includes a DVD that contains all of the CD-ROMs that make up the full Fedora Core Distribution, including the source code.

The Internet GigaBook™ For Dummies®

PKI security solutions for the enterprise