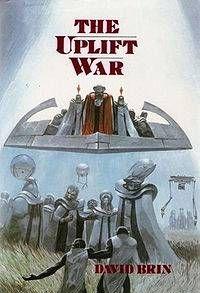 Billions of years ago, an alien race known as the Progenitors began the genetically engineered techniques by which non-intelligent creatures are given intelligence by one of the higher races in the galaxy. Once “Uplifted, these creature must serve their patron race before they, in turn, can Uplift other races. Human intelligence, which developed by itself (and brought about the Uplifting of chimpanzees and dolphins), is an affront to the aliens who plan an attack, threatening a human experiment aimed at producing the next Uplift.