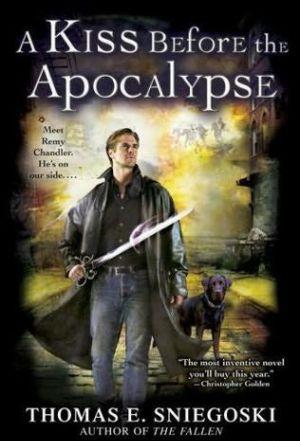 Boston P.I. Remy Chandler has many talents. He can will himself invisible, he can speak and understand any foreign language (including the language of animals), and if he listens carefully, he can hear thoughts.

Unusual, to say the least — for an ordinary man. But Remy is no ordinary man — he's an angel. Generations ago, he chose to renounce heaven and live on Earth. He's found a place among us ordinary humans; friendship, a job he's good at — and love.

Now he is being drawn into a case with strong ties to his angelic past. The Angel of Death has gone missing — and Remy's former colleagues have come to him for help. But what at first seems to be about tracing a missing person turns out to involve much more — a conspiracy that has as its goal the destruction of the human race.

And only Remy Chandler, formerly known as the angel Remiel can stop it.

In the House of the Wicked

Where Angels Fear to Tread

Walking In the Midst of Fire

Комментарии к книге "A Kiss Before the Apocalypse"