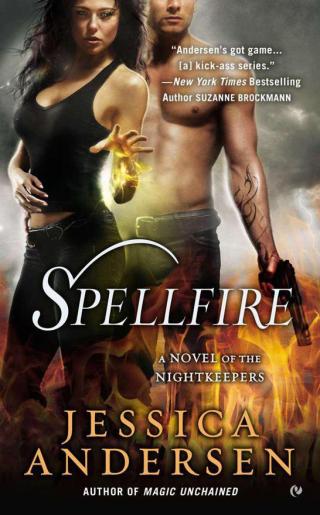 Imprisoned and tortured by the demoness who tricked him into betraying the Nightkeepers and the woman he loves, Rabbit must endure excruciating pain to protect the diminished Skywatch army as the end-time approaches. Although an ancient prophecy says his unique powers are key to winning the final battle in the doomsday war, he hasn’t just lost his credibility—he’s lost his magic.
Myrinne is far from the woman Rabbit once knew—she’s got magic now, and despite emotional scars, she’s strong enough to help the Nightkeepers. And yet she’s not prepared to handle the fiercely driven man he’s become or the new, dangerous feelings that spark between them.
With the barrier ready to fall and a xombi outbreak in the human world, Rabbit and Myrinne must forge a new partnership amid dangerous instability and the threat of an undead army. In the end, it will be up to Rabbit to master his ferocious magic—or all will be lost. For him, for the woman he doesn’t have the right to love anymore, and for the fate of the world…

Prime Vampires 2. I Thirst for You