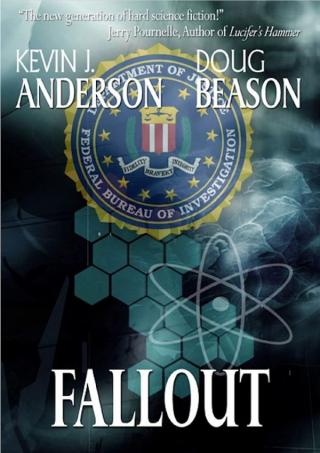 They call themselves Eagle’s Claw, one of the most extreme militia groups in the United States. They have infiltrated the Device Assembly Facility at the Nevada Nuclear Test Site, and the most frightening display of nuclear terrorism is about to unfold.
Only the Nebula-nominated collaboration of Kevin J. Anderson and Doug Beason could masterfully blend hard-as-nails high-technology with hard-driving intrigue to deliver such an explosive thriller. FBI Special Agent Craig Kreident — the unforgettable hero from Virtual Destruction — returns in this breathtaking tour de force of terrorism, cutting-edge technology, and raw emotional power.
Written by two insiders who have worked at the nation’s nuclear design laboratories and high-security research facilities, including the Nevada Nuclear Test Site, Fallout is a pulse-pounding thriller of an extremist group and stolen nuclear weapons, as well as a detailed portrait of what happens behind the fences of government facilities.

Assault on Alpha Base

Of Fire and Night