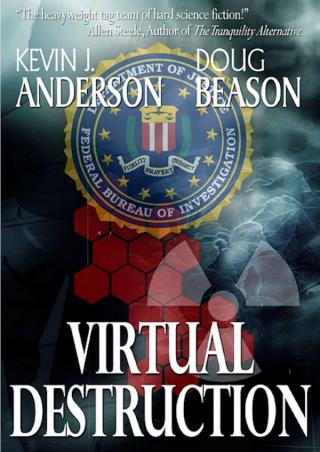 At the Lawrence Livermore National Laboratory in California — one of the nation’s premier nuclear-weapons design facilities — high-level physicists operate within heavy security to model and test new warhead designs. But politics can be just as dangerous as the weapons they design, and with gigantic budgets on the line, scientific egos, and personality clashes, research can turn deadly.
When a prominent and abrasive nuclear-weapons researcher is murdered inside a Top Security zone, FBI investigator Craig Kreident is brought in on the case — but his FBI security clearance isn’t the same as a Department of Energy or Department of Defense clearance, and many of the clues are “sanitized” before he arrives. Kreident finds that dealing with red tape and political in-fighting might be more difficult than solving a murder.
Written by two insiders who have worked at Lawrence Livermore, Virtual Destruction is not only a gripping thriller and complex mystery, but a vivid portrayal of an actual US nuclear-design facility.

Assault on Alpha Base