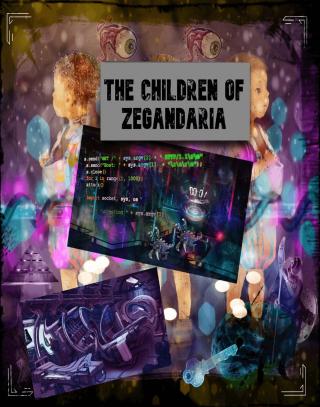 Some nineteen or so years after the events surrounding the Great War of Au Kaktir and all of the resulting aftermath, the world of the planet Zegandaria is vastly different, and time has left its mark on those heroes who have survived - and they are not all that many. The planet is immeasurably more technologically advanced and filled with a strange, oppressive atmosphere. Sasia is married with two sons, and Zorin is a veteran hero and university professor of military science. Rule is in the hands of a supreme sovereign, Om Gur Nal, who controls the physical and mental state of everyone. The friends come together to unravel the mystery of a religious cult threatening the security of the polis. But what is their surprise when they begin to realize that things are much deeper. Somewhere out there, each of their minds has been cruelly brainwashed by the infamous Doctor Gad ‘Di Enn, who wants complete dominion over the surviving remnants of the planet's population. A humane doctor guarron - Ser Mac Zon. An evil archivist - Kazuk Mon - leader of a fanatical religious cult. An ingenious inventor and bringer of a new faith - Archibald Peos. And Jonathan Sacklin - a mad champion of science. And many of the characters won't just be black and white characters. Mark, Sasia, Zorin, and Durnyam, along with Detective Boss' men, will try to get to the bottom of the whole leper reality just to find their own demons. And in the end, they will each experience their own Hell. And Hell will turn out to be a little different from what practically everyone thought it would be. Many traitors will play a part in it all, and redemption will be given to a few, and those who thought they were capable of making it to the very end will fail. But in the end a way out and a natural denouement will be found. And a chance for a new life!