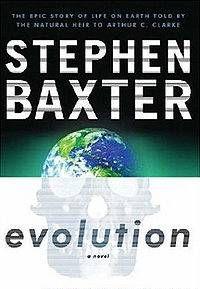 The primary protagonist in Evolution is evolution itself (although primates as a group constitute another protagonist). The book follows the hero’s course as it shapes surviving pre-humans into tree dwellers, remoulds a group that drifts from Africa to a (then much closer) New World on a raft formed out of debris, and confronting others with a terrible dead end as ice clamps down on Antarctica.

The stream of DNA runs on elsewhere, where ape-like creatures in North Africa are forced out of their diminishing forests to come across grasslands where their distant descendants will later run joyously. At one point, hominids become sapient, and go on to develop technology, including a universal constructor machine that goes to Mars and multiplies, and in an act of global ecophagy consumes Mars by converting the planet into its descendants. Human extinction (or the extinction of human culture) also occurs in the book, as well as the end of planet Earth and the rebirth of life on another planet. (The extinction-level event that causes the human extinction is, indirectly, an eruption of the volcano Rabaul, coupled with various actions of humans themselves, some of which are only vaguely referred to, but implied to be a form of genetic engineering which removed the ability to reproduce with non-engineered humans.) Also to be found in Evolution are ponderous Romans, sapient dinosaurs, the last of the wild Neanderthals, a primate who witnesses the extinction of the dinosaurs, symbiotic primate-tree relationships, mole people, and primates who live on a Mars-like Earth.