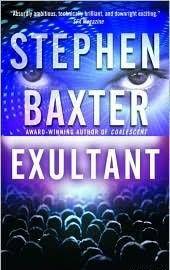 In humankind’s Third Expansion, the species has spread throughout the galaxy and assimilated all challengers but the mysterious Xeelee; in a 20,000-year stalemate, humans have kept them at bay in the galaxy’s center. Time travel (used by both sides to gather intelligence) creates numerous “drafts” of time lines, but apart from this uncertainty the endless war has brought about a strangely static human society. Soldiers and pilots are bred in vats near the Front and taught only war; few survive past their teens. When Prius, a young pilot, captures a Xeelee ship and takes it to the recent past for study, an innovative program is begun to develop new weapons technology. While Prius Blue (the pilot from the future time line, now stuck in this one) is sent to the Front, the younger Prius Red (from this time line) must travel throughout the solar system with an eccentric but brilliant scientist in a quest for knowledge needed for the anti-Xeelee weapon. Working with widely differing elements of society, Red learns many secrets he’d rather not know, adjusts to new knowledge, and grows into a leadership role: he heads up Exultant, the elite squadron tasked with deploying the new weapon. Even in a genre characterized by unfettered imagination, Baxter’s future universe is extraordinary in its depth, breadth, and richness of invention. Cutting-edge physics, subtle humor, time-travel paradoxes, and loopy twists combine to give readers a wonderfully original sci-fi experience. It can be read independently of Coalescent, which is set in the same universe but mostly in the present age.

A Plague of Demons