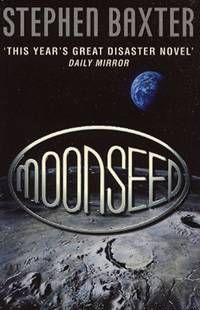 Stephen Baxter established himself as a major British sci-fi author with tales of exotic, far-future technology. More recently, in Voyage, Titan and now Moonseed, he shows his love for the hardware of the real world’s space programme. (Comparisons with Tom Wolfe’s The Right Stuff have been frequent.) Moonseed is a spectacular disaster novel whose threat to Earth comes from a long-forgotten Moon rock sample carrying strange silver dust that seems to be alien nanotechnology — molecule-sized machines. Accidentally spilt in Edinburgh, this ‘Moonseed’ quietly devours stone and processes it into more Moonseed. Geology becomes high drama: when ancient mountains turn to dust, the lid is taken off seething magma below. Volcanoes return to Scotland, and Krakatoa-like eruptions spread Moonseed around the world. A desperate, improvised US/Russian space mission heads for the Moon to probe the secret of how our satellite has survived uneaten. Baxter convincingly shows how travel costs could be cut, with a hair-raising descent on a shoestring lunar lander that makes Apollo’s look like a luxury craft. The climax brings literally world-shaking revelations and upheavals. Moonseed is a ripping interplanetary yarn.