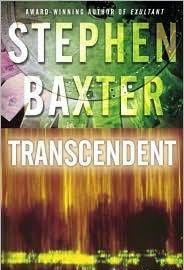 Set in the same vast time scale and future as Coalescent (2003) and Exultant (2004), Transcendent can be read independently. Michael Poole is a middle-aged engineer in the year of the digital millennium (2047) and Alia is a recognizably human (but evolved) adolescent born on a starship half a million years later. Michael still dreams of space flight, but the world and its possibilities are much diminished due to environmental degradation. The gifted teen has studied Michael’s life, for the Poole family played a pivotal role in creating the human future, and thus her world. Through seemingly supernatural apparitions, Alia bridges time to communicate with Michael as they determine the future of humanity. The Pooles are a troubled family, and readers will appreciate the conflict between Michael and his son as they are forced to find common ground in a struggle to reverse the final tipping point of global warming. Teens will also understand Alia’s alarm, and her growing determination to choose her own destiny, when she is selected to join the Transcendents and is rushed into their unimaginable post-human reality. This is visionary, philosophical fiction, rich in marvels drawn from today’s cutting-edge science. A typical paragraph by Baxter might turn more ideas loose on readers than an entire average, mundane novel does, but all this food for thought is delivered with humor and compassion. Experienced SF readers will enjoy sinking their teeth into the story, while general readers who have enjoyed near-future, science-based suspense novels such as those by Michael Crichton will discover here that science fiction can set a higher, much richer standard than what they’ve experienced before.