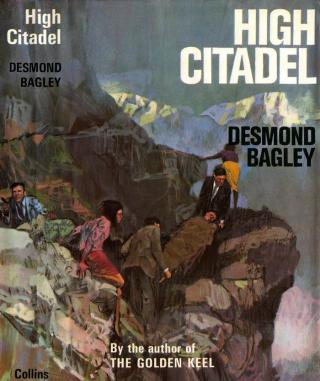 The setting of High Citadel is the towering peaks of the Andes. A non-scheduled passenger plane is hi-jacked in mid-air and forced down among the forbidding mountains. The surviving passengers, stranded at 16,000 feet, embark on a perilous descent — only to find themselves trapped by a formidably armed Communist force whose prey is one particular passenger, the ex-president of Cordillera, and his lovely niece. But it soon becomes clear that the ambushers are intent on wiping out all the other survivors as well: “dead men tell no tales.” As the trapped men and women grimly realise the odds at stake, two intensely exciting stories unfold. On the lower slopes, a desperate delaying action is fought with ingeniously contrived weapons. At the same time, three of the men set out to brave the higher regions of the rock and glacier in a gruelling race for help. The climax, as unexpected as it is hair-raising, brings a wonderful at at times deeply moving adventure — thriller to a worthy close.