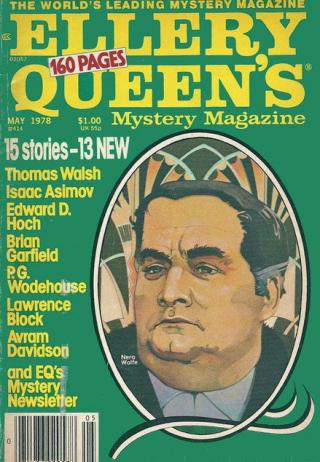 When I finished writing The Ehrengraf Defense in 1976, I knew I had found a character I’d like to revisit. But it was Frederic Dannay’s immediate enthusiasm for Ehrengraf that made me write one story after another about the diminutive attorney. Fred, of course, was one of the pair of cousins who wrote the Ellery Queen mysteries, and it was Fred who edited Ellery Queen’s Mystery Magazine, and he snapped up the stories as quickly as I wrote them.
Ehrengraf’s debut grew out of a plot device; in the course of my writing the story, Martin Ehrengraf came into being. In his second appearance, we see him more fully realized, tailoring his approach to the case to suit circumstances, and altering them to his purposes.
“The Ehrengraf Presumption. Any client of Martin H. Ehrengraf is presumed by Ehrengraf to be innocent, which presumption is invariably confirmed in due course, the preconceptions of the client himself notwithstanding.”
Words to live by...

A Walk Among the Tombstones

The Thief Who Couldn’t Sleep