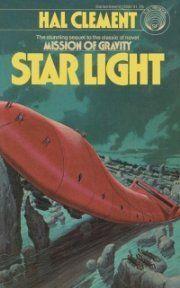 Clement’s Mission of Gravity was the engaging tale of the adventures of Barlennan, a sea captain among his caterpillar-like people, on the high-gravity world of Mesklin. In Star Light Barlennan and his sailors go with humans to the even stranger world of Dhrawn, a “crusted star” of the type mentioned by Harlow Shapley. Dhrawn circles the feeble red star Lalande 21185, which actually exists (although the planet is fictionalized). Most of the book is the story of a huge landship crossing Dhrawn’s solid surface crewed by these nonhuman sailors, amidst bizarre dangers, and trying to keep Barlennan’s strange plan secret from humans. The characters, despite being mostly from Barlennan’s world, Mesklin, are well drawn and the setting is well realized. Readers bewildered by the melting and freezing of Dhrawn’s ammonia-water hydrosphere will do well to consult a phase diagram.

Nominated for Hugo Award for Best Novel in 1971.