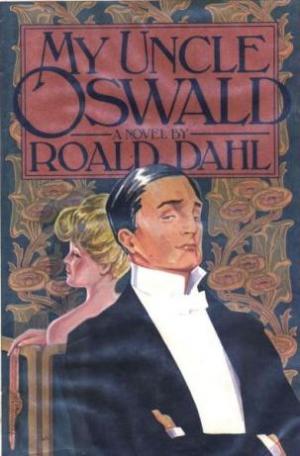 HIS FIRST NOVEL FOR GROWNUPS
From that most dramatically dual of literary personalities, writing not in his classic “Chocolate Factory” incarnation but as the devilish Dahl of Kiss Kiss and Switch Bitch — here is the ultimate adult romp.
Behold Uncle Oswald, Michelangelo of seduction.
He makes Casanova look like Winnie the Pooh.
He stumbles — circa 1919 — onto the world’s most powerful aphrodisiac: Powdered Sudanese Blister Beetle.
it makes Spanish Fly look like Ovaltine.
Then he discovers a method of quick-freezing sperm . . . and gets the most imspired commercial idea in history.
First he makes a list of the 51 living geniuses and crowned heads (from young James Joyce and King Albert of the Belgians to Puccini and Henry Ford) whom your average very rich and ambitious woman might most want to father her children. Then he retains the half-Persian, ineffably beautiful (and insatiable) biology student Yasmin to personally administer Blister Beetle to each of the famous 51 and, during each incredible aftermath, to collect the priceless essence of fatherhood for freezing. Well. As we follow Yasmin across Europe — from Genius to Genius and Royal to Royal — amazing scenes take place. George Bernard Shaw’s ultimate secret is revealed. Freud is utterly bewildered. Picasso doesn’t even put down his paintbrush . . .
How does Yasmin gain access to the great? Which of Them is interestingly activated by the Beetle Pill: King Alfonso? Proust? Kipling perhaps? Who will ultimately make a fortune from the scheme? And will the world be incresingly populated (and, of course, enhanced) by the secret progeny and grand-progeny, ad infinitum, of the dazzling 51? These are only a few of the questions answered in a book in which you encounter — under quite extraordinary circumstances — just about everybody who was anybody you might like to have had for your dad.