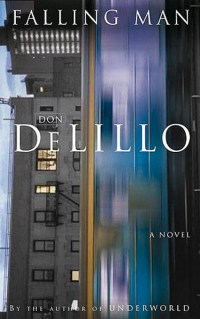 The defining moment of turn-of-the-21st-century America is perfectly portrayed in National Book Award winner Don DeLillo's Falling Man. The book takes its title from the electrifying photograph of the man who jumped or fell from the North Tower on 9/11. It also refers to a performance artist who recreates the picture. The artist straps himself into a harness and in high visibility areas jumps from an elevated structure, such as a railway overpass or a balcony, startling passersby as he hangs in the horrifying pose of the falling man.

Keith Neudecker, a lawyer and survivor of the attack, arrives on his estranged wife Lianne's doorstep, covered with soot and blood, carrying someone else's briefcase. In the days and weeks that follow, moments of connection alternate with complete withdrawl from his wife and young son, Justin. He begins a desultory affair with the owner of the briefcase based only on their shared experience of surviving: "the timeless drift of the long spiral down." Justin uses his binoculars to scan the skies with his friends, looking for "Bill Lawton" (a misunderstood version of bin Laden) and more killing planes. Lianne suddenly sees Islam everywhere: in a postcard from a friend, in a neighbor's music-and is frightened and angered by its ubiquity. She is riveted by the Falling Man. Her mother Nina's response is to break up with her long-time German lover over his ancient politics. In short, the old ways and days are gone forever; a new reality has taken over everyone's consciousness. This new way is being tried on, and it doesn't fit. Keith and Lianne weave into reconciliation. Keith becomes a professional poker player and, when questioned by Lianne about the future of this enterprise, he thinks: "There was one final thing, too self-evident to need saying. She wanted to be safe in the world and he did not."

DeLillo also tells the story of Hammad, one of the young men in flight training on the Gulf Coast, who says: "We are willing to die, they are not. This is our srength, to love death, to feel the claim of armed martyrdom." He also asks: "But does a man have to kill himself in order to accomplish something in the world?" His answer is that he is one of the hijackers on the plane that strikes the North Tower.

At the end of the book, De Lillo takes the reader into the Tower as the plane strikes the building. Through all the terror, fire and smoke, De Lillo's voice is steady as a metronome, recounting exactly what happens to Keith as he sees friends and co-workers maimed and dead, navigates the stairs and, ultimately, is saved. Though several post-9/11 novels have been written, not one of them is as compellingly true, faultlessly conceived, and beautifully written as Don De Lillo's Falling Man. -Valerie Ryan

Starred Review. When DeLillo's novel Players was published in 1977, one of the main characters, Pammy, worked in the newly built World Trade Center. She felt that "the towers didn't seem permanent. They remained concepts, no less transient for all their bulk than some routine distortion of light." DeLillo's new novel begins 24 years later, with Keith Neudecker standing in a New York City street covered with dust, glass shards and blood, holding somebody else's briefcase, while that intimation of the building's mortality is realized in a sickening roar behind him. On that day, Keith, one half of a classic DeLillo well-educated married couple, returns to Lianne, from whom he'd separated, and to their young son, Justin. Keith and Lianne know it is Keith's Lazarus moment, although DeLillo reserves the bravura sequence that describes Keith's escape from the first tower-as well as the last moments of one of the hijackers, Hammad-until the end of the novel. Reconciliation for Keith and Lianne occurs in a sort of stunned unconsciousness; the two hardly engage in the teasing, ludic interchanges common to couples in other DeLillo novels. Lianne goes through a paranoid period of rage against everything Mideastern; Keith is drawn to another survivor. Lianne's mother, Nina, roils her 20-year affair with Martin, a German leftist; Keith unhooks from his law practice to become a professional poker player. Justin participates in a child's game involving binoculars, plane spotting and waiting for a man named "Bill Lawton." DeLillo's last novel, Cosmopolis, was a disappointment, all attitude (DeLillo is always a brilliant stager of attitude) and no heart. This novel is a return to DeLillo's best work. No other writer could encompass 9/11 quite like DeLillo does here, down to the interludes following Hammad as he listens to a man who "was very genius"-Mohammed Atta. The writing has the intricacy and purpose of a wiring diagram. The mores of the after-the-event are represented with no cuteness-save, perhaps, the falling man performance artist. It is as if Players, The Names, Libra, White Noise, Underworld-with their toxic events, secret histories, moral panics-converge, in that day's narrative of systematic vulnerability, scatter and tentative regrouping.