Not After Midnight & Other Stories 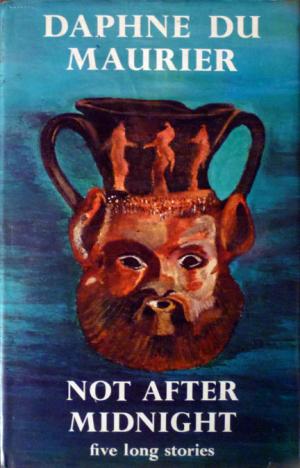 Not After Midnight is a collection of short stories by Daphne du Maurier, all with different characters and themes but similar in that they touch on the supernatural or strange events.
"Don't Look Now" — this novella features John and Laura who are on holiday in Venice. But it is a dangerous place for them as they are being followed by two old sisters and there is a killer on the loose.
"Not After Midnight" is a tale about a lonely teacher who goes on a painting holiday in Crete and meets a strange American couple. The woman invites him to visit them in their hotel room but "not after midnight," the reason for this becoming clear as the story progresses.
In "A Border Line Case", a young actress pursues old family friend Nick after the death of her father. She discovers he is an IRA executive and accompanies him on a bombing raid in Ireland, but soon learns he is not all he seems to be.
In "The Way of the Cross", a disparate group of pilgrims from the same village embark on a trip to frenetic, dusty Jerusalem. Their regular vicar is taken ill and replaced by The Reverend Babcock, a rough diamond from Leeds. On the first night, young Robin, a precocious nine-year-old, suggests a walk to the Garden of Gethsemane. In the dark, among the bushes and trees, two people overhear things about themselves that force them to re-evaluate their lives. Subsequently the whole group learn a great deal about themselves and their loved ones, and return home better people.
"The Breakthrough" is a science fiction-style story set in a deserted lab in the wilds of Norfolk. A man is sent to help with a new computer but soon realizes the strange purpose of the scientific team and decides to leave. However, he gets caught up in the experiment and stays. Mac, the leader of the group, is convinced that he can trap the life force, or soul, at the point of death and utilize its energy. His guinea pig Ken is the affable young assistant who happens to be dying of leukemia. Needless to say, the plan goes horribly awry.

Комментарии к книге "Not After Midnight & Other Stories"