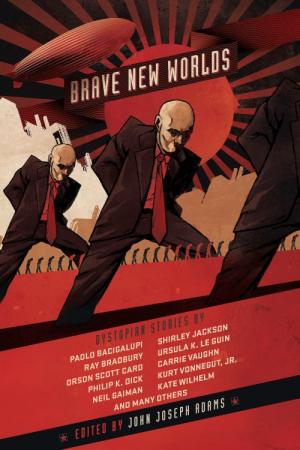 When the government wields its power against its own people, every citizen becomes an enemy of the state. Will you fight the system, or be ground to dust beneath the boot of tyranny?
In his smash-hit anthologies Wastelands and The Living Dead, acclaimed editor John Joseph Adams showed you what happens when society is utterly wiped away. Now he brings you a glimpse into an equally terrifying future — what happens when civilization invades and dictates every aspect of your life?
From 1984 to The Handmaid’s Tale, from Children of Men to Bioshock, the dystopian imagination has been a vital and gripping cautionary force. Brave New Worlds collects 33 of the best tales of totalitarian menace by some of today’s most visionary writers.
From Huxley's Brave New World, to Orwell's 1984, to Atwood's The Handmaid's Tale, dystopian books have always been an integral part of both science fiction and literature, and have influenced the broader culture discussion in unique and permanent ways. Brave New Worlds brings together the best dystopian fiction of the last 30 years, demonstrating the diversity that flourishes in this compelling subgenre. This landmark tome contains stories by Ursula K. Le Guin, Cory Doctorow, M. Rickert, Paolo Bacigalupi, Orson Scott Card, Neil Gaiman, Ray Bradbury, and many others.

The Best American Noir of the Century [Collections]