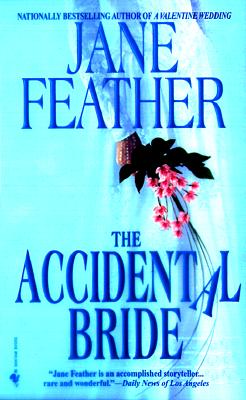 Dear Reader,
In my "Brides" trilogy, three unconventional young women vow they will never marry-only to be overtaken by destiny. The Accidental Bride could only be the story of Phoebe, the "awkward" one....
For four years, Cato, the Marquis of Granville, had been just another man-the uninteresting, somewhat intimidating husband of Phoebe's older sister. But then her sister died, and Phoebe seemed a reasonable substitute. Her forced engagement to him should have been quite a cold-blooded arrangement...except that one day Phoebe looked at Granville-really looked at him-and saw what she'd never seen before: he was darkly, breathtakingly attractive.
Once she'd noticed, she couldn't seem to stop noticing, and suddenly Phoebe was disastrously in love. It would be nothing short of torture to be married to Granville, knowing he didn't love her and never would. After all, Phoebe was not the kind of woman men fell in love with-Phoebe with her untidy hair, her rumpled clothes, and her fingers forever ink-stained from the poetry she wrote.
When running away does not solve her problems, Phoebe decides to try something a little different-something that involves a little change in wardrobe, a daring new attitude, and a bit of brazen seduction.
Granville is about to discover that his awkward Phoebe is woman enough even for him....

Seduce Me with Sapphires