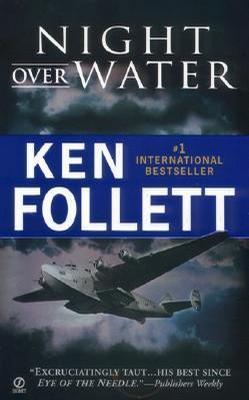 Night Over Water is a politically-minded novel written by author Ken Follett and published by William Morrow in 1991. It was reprinted as a paperback book in the U.S. in 1992.

Night Over Water is a fictionalized account of the final flight of the Pan American Clipper passenger airplane during the first few days of World War II, early September, 1939. Follett is careful to state that, though the flight and all of the characters are fictional the plane, a Boeing 314, was real and was nicknamed the "Pan Am Clipper." It was a seaplane, an aircraft that landed in the sea, not on an airstrip, powered by 4 propeller engines. It was capable of crossing the Atlantic Ocean in little more than 24 hours with intermediate stops in Shannon Estuary at Foynes, Ireland, Bay of Exploits at Botwood, Newfoundland and Shediac Bay, Canada, at each of which stop Follett adds a scene or two of intrigue. This route made the Pan Am Clipper the fastest mode of transatlantic travel at the time — and very appealing to those who wanted to escape from Britain before the start of the war.

В августе 79-го, или Back in the USSR