At Hitler's Side: The Memoirs of Hitler's Luftwaffe Adjutant 1937–1945 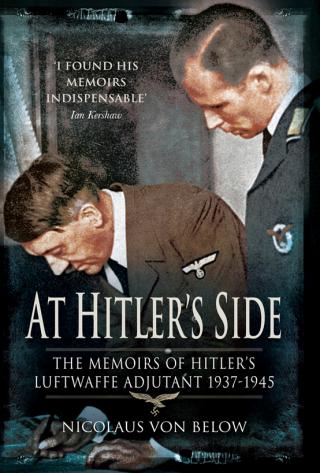 This is the personal account of a Luftwaffe aide always at Hitler's side from 1937 until the last days in Berlin, now published for the first time in English. Nicolaus von Below was a 29-year-old pilot when Goering selected him for the position of Hitler's Luftwaffe adjutant. He was with Hitler at every stage as World War II was planned, started and unfolded, and his observations tell of Hitler's responses to momentous events as well as military decisions and policy-making at Fnhrer Headquarters. His account is a superb source describing life in Hitler's inner circle, relied on by Gitta Sereny in her biography of Albert Speer. He provides fascinating insight into how Hitler planned the invasions of Poland and Russia, what he thought of Britain and America, why he placed his faith in the V-1 and V-2 projects, how others dealt with him, and much more. Von Below was present at the assassination attempt in July 1944, and records the effect on Hitler and his followers. He portrays the hopeless mood caused by Germany's losses in 1944 and the collapse of German fronts in 1945, leading to Hitler's final days as the war in Europe came to an end. Von Below was the last of Hitler's close military entourage to emerge from the bunker alive.

Комментарии к книге "At Hitler's Side: The Memoirs of Hitler's Luftwaffe Adjutant 1937–1945"