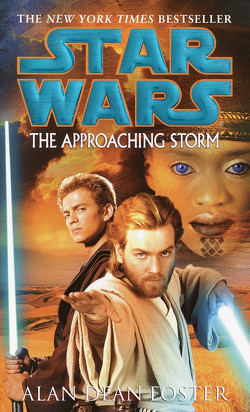 In the years since the events of Star Wars: The Phantom Menace, the Republic has continued to crumble, and more and more, the Jedi are needed to help the galactic government maintain order. As Star Wars: Attack of the Clonesopens, Obi-Wan Kenobi and Anakin Skywalker have just returned from a mission on a world called Ansion. Written by beloved Star Warsveteran Alan Dean Foster, and starring a new character from the upcoming movie, The Approaching Stormtells the story of that daring mission.

The Republic is decaying, even under the leadership of Supreme Chancellor Palpatine, who was elected to save the galaxy from collapsing under the forces of discontent. On the tiny but strategic planet of Ansion, a powerful faction is on the verge of joining the growing secessionist movement. The urban dwellers wish to expand into the prairies outside their cities — the ancestral territory of the fierce, independent Ansion nomads. If their demands are not met, they will secede — an act that could jump-start a chain reaction of withdrawal and rebellion by other worlds of the Republic.

At the Chancellor's request, the Jedi Council sends two Jedi Knights, Obi-Wan Kenobi and Luminara Unduli, to resolve the conflict and negotiate with the elusive nomads. Undaunted, Obi-Wan and Luminara, along with their Padawans Anakin Skywalker and Barriss Offee, set out across the wilderness. Many perils lie waiting to trap them. The Jedi will have to fulfill near-impossible tasks, befriend wary strangers, and influence two great armies to complete their quest, stalked all the while by an enemy sworn to see the negotiations collapse and the mission fail…