The Case of the Empty Tin 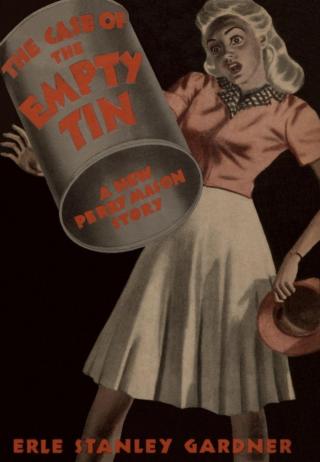 A bright, shiny tin can in a dark, cobwebby corner of the cellar preserve shelf — unlabelled and empty!
Mrs. Gentrie, the meticulous hose-wife, was annoyed but not too upset. Her sister-in-law Rebecca was exited and suspicious. Delman Steele, their new young boarder, was quietly interested...
Then things began to happen. A man and his housekeeper were found missing from the house next door. Willful old Elston Karr, who used to run guns up the Yangtze and was now confined to a Wheel-chair in the flat above the missing man’s apartment, retained Mason to protect him from — well, Mason wasn’t quite sure himself. But his mind began to work fast.
Then Mason heard about the empty tin can. It interested him — a lot.
All our old friends are here, Della Street, Paul Drake, Lieutenant Tragg, in a mystery so fast and exiting that it has been called “even better than Gardner.”

The Case of the Postponed Murder

The Case of the Calendar Girl

The Case Of The Dangerous Dowager

The Case of the Stuttering Bishop

Комментарии к книге "The Case of the Empty Tin"