The Case of the Substitute Face 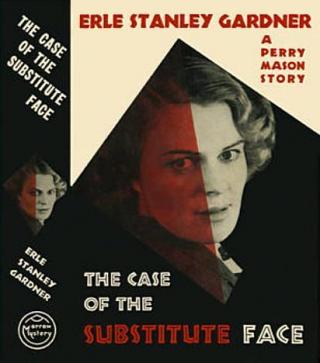 Perry Mason has been batting around the Orient, taking a well-earned vacation. (Yes, Della Street is along.) We pick up on his way to the roar of the city, the jangle of telephones, the blast of automobile horns, to clients who lie to him and yet expect him to stand behind them. And Perry can hardly wait to get back!
He doesn’t have to wait to get home, however, for excitement to start. Just out of Honolulu, a fellow passenger comes to him with a very strange story.
Mason has already noticed the party of three: the middle-aged man with the piercing gray eyes, the slender, graceful woman, and the daughter who looks so much like a famous movie actress. Now beside the ship’s rail, he listens to the queer tale a woman tells in a voice of nervous hysteria. Until two months before she was known as Mrs. Moar. But overnight her husband — and so we have: The Case of the Substitute Face.

The Case of the Shoplifter's Shoe

The Case of the Long-Legged Models

A Study in Scarlet

The Case of the Velvet Claws

Комментарии к книге "The Case of the Substitute Face"