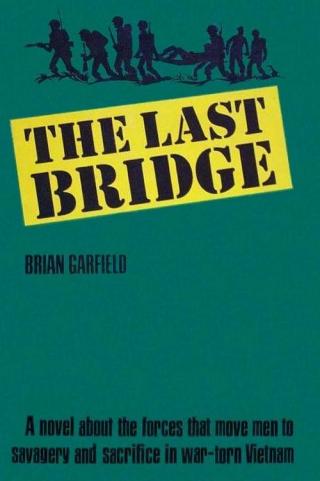 An American Army combat unit in war-torn Vietnam, a prison camp behind enemy lines, a strategically important railroad bridge on the Sang Chu River — these are the ingredients of this gripping suspense novel. Here, set in bold relief against a background of slashing monsoon rain and upthrust poison pungi stakes of elusive traitors and friendly Montagnard tribesmen, in the timely and dramatic story of Colonel David Tyreen’s eight man suicide mission into North Vietnam. Of first priority in the rescue, before he talks, of Eddie Kreizler, held for interrogation by torture in a Viet Minh camp in North Vietnam. Second mission — to destroy the railroad bridge on the Sang Chu, protected from air attack by overhanging cliffs and heavily guarded against sabotage. From the moment they leave their home base in South Vietnam, the unit is plagued by trouble. There is the dangerous parachute drop — in the midst of a raging monsoon — that almost ends in disaster. Then the grim spectre of treachery and internal dissension splits the group as they begin to encounter enemy patrols. The arresting cast of characters is headlined by Colonel Tyreen, weak from malaria but fanatically intent on carrying out the mission; Captain Saville, who both admires and hates Tyreen and is willing to pay a staggering price for his loyalty; Sergeant Hooker, a tough career soldier and a demolitions expert who distrust the unit’s two Vietnamese members; and McKuen and Shannon, two reckless fliers with a clipped and outdated pale. The Last Bridge is a swashbuckling adventure tale that brings to vivid life all the raw and brutal emotions of men at war, and the bitter personal conflicts that move them to savagery and sacrifice.