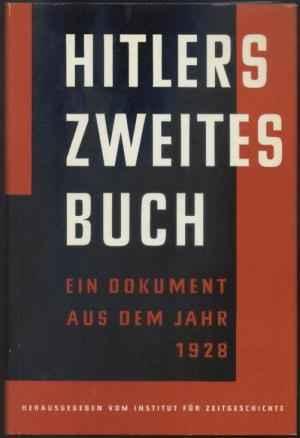 From Publishers Weekly
In 1958, while directing the microfilming and organization of a trove of archives that the U.S. forces had taken from the Nazis at the end of WWII, historian Weinberg (A World at Arms) discovered the manuscript of a second book that Hitler had written but never published. The manuscript was published in German in 1961, accompanied by Weinberg’s annotations, but this is the first authoritative English version (a pirated and poor translation appeared in the 1960s). The text bears all of Hitler's hallmarks: rambling thoughts, half-baked ideas, pedantic writing-along with a terrifying, sustained belief in war and violence as the means to ensure that Germans would flourish. Compared to Mein Kampf, there are fewer pages devoted to Jews. Nonetheless, what comes across most strongly is Hitler’s abiding commitment to the principle of race and his identification of Jews as the enemy that threatened to undo all that Germans had created. Hitler dwells at length on foreign policy, and outlines a strategy of alliance with Fascist Italy and Great Britain. (He actually believed that Britain would accept a German-dominated European continent so long as Germany did not challenge the overseas British empire.) He also foresees an inevitable clash with the United States. This provides solid historical background on Hitler's thinking in the late 1920s, when his party was nothing more than a tiny, radical sect. Weinberg provides helpful notes and a very informative introduction.
Copyright 2003 Reed Business Information, Inc.
* * *
“Politics is history in the making.”
Such were the words of Adolf Hitler in his untitled, unpublished, and long suppressed second work written only a few years after the publication of Mein Kampf.
Only two copies of the 200 page manuscript were originally made, and only one of these has ever been made public. Kept strictly secret under Hitler’s orders, the document was placed in an air raid shelter in 1935 where it remained until it’s discovery by an American officer in 1945.
Written in 1928, the authenticity of the book has been verified by Josef Berg (former employee of the Nazi publishing house Eher Verlag), and Telford Taylor (former Brigadier General U.S.A.R., and Chief Counsel at the Nuremburg war-crimes trials) who, after an analysis made in 1961, comments:

“If Hitler’s book of 1928 is read against the background of the intervening years, it should interest not scholars only, but the general reader.”*

Hitler: Speeches and Proclamations, 1932-1945 - The Chronicle of a Dictatorship