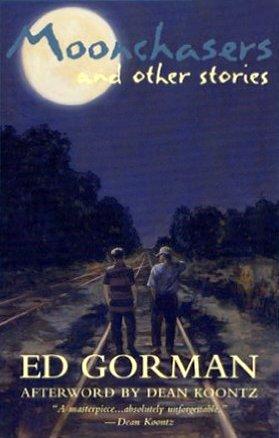 Two teenage boys befriend an escaped bank robber — an act that changes their lives forever — in Moonchasers, a powerful short novel in the tradition of Stand by Me and To Kill a Mockingbird. Tom and Barney are only fifteen years old, and content to spend the summer sharing dime novels, monster movies, and all the other innocent pleasures Somerton, Iowa, has to offer. But when they conspire to shelter a wounded criminal who reminds them of their idol, Robert Mitchum, they set in motion a chilling chain of events that will teach them about trust, brutality, and courage. Moonchasers and Other Stories also contains several other compelling tales of suspense by Ed Gorman, including “Turn Away,” which won the Shamus Award for best detective story, and a new story that has never appeared in any previous book or collection, “Out There in the Darkness.” These and other stories make up an outstanding collection of fiction by an author who has been described by the San Diego Union as “one of the most distinctive voices in today’s crime fiction.”

Murder on the Aisle