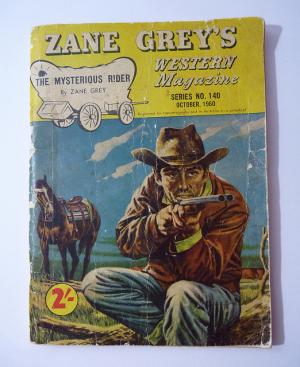 The story of a terrible gunfighter with a strange history and Columbine Bellounds, a lost child brought up by a stern old rancher who expects her to marry his rascally son out of gratitude.

Review
This is an earlier Zane Grey work (1921 copyright) but it is well worth the reading. I would highly recommend it for the younger generation, boys or girls. I found the book very enjoyable. If you want to read a western about shootouts, and that sort of thing, then this is not your book. But for a good, descriptive drama, that grabs you and makes the pages turn, then this is the book for you. Rancher Bill Belllounds had brought up Columbine as though she were his daughter. Out of affection for her foster father, Columbine had agreed to marry Bills son, Jack-a drunkard, gambler, coward, and thief. But the man she really loved was cowboy Wilson Moore, and he was everything Belllounds son should have been. Then the strange, clairvoyant little man they called Hell-Bent Wade came to work at the ranch. You can believe me when I say somethin will happen, he declared prophetically. Columbine isn't going to marry Jack Belllounds. I loved to read the dialogue, Zane Greys books may be a little dated to the time period when he wrote them, but its still a good book.

Riders of the Purple Sage